You will not be disappointed when looking for Festivals and Celebrations in Sardinia, all year long: whether you’re searching for Music or Sport Festivals or for wild ancient tradition or religious procession you will find the perfect answer in our Island.

Most of our Festival have been celebrated for Centuries, but in the last years, cultural and sport events have also been blooming not only in the main cities, but also in the smaller villages. 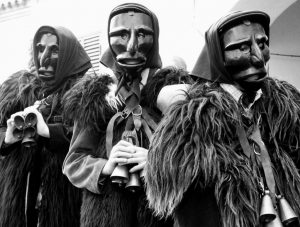 February – The Carnival period reaches its colorful climax on and around Shrove Tuesday, with a range of events throughout the island. In Oristano, a highly theatrical medieval joust is re-enacted in the Sa Sartiglia festival; in Mamoiada (near Nuoro), there’s a procession of the sinister and hairy Mamuthones and the flamboyantly garbed Issohadores, and other mountain villages feature similar scenes of shaggy sheepskin jerkins and eerie masks.

March/April – Easter is marked throughout the island with church services and processions, the festivities often recall Sardinia’s Spanish inheritance. The rituals of the Misteri (representing the Passion of Christ) and Incontru (the symbolic meeting of the Virgin with Christ) are enacted w 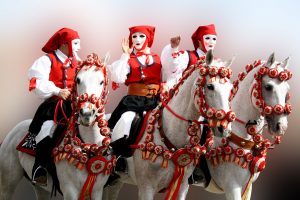 May – one of the most attended and colorful parade is Sant’Efisio, Cagliari’s patron: delegations from villages show off their best costumes, walking or riding, beside the Saint for 40 km, from Cagliari, to Nora down the coast.

May/June – On San Pietro, an offshore isle on Sardinia’s southwest coast, the annual tuna catch is celebrated at the Girotonno festival, four days of eating fresh tuna in thousands of different ways, music and dancing. 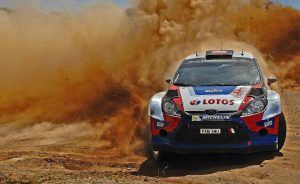 July – the most stunning localities of South Sardinia host the annual European Jazz Expo: the Sound Park on Riola Sardo, the Anfiteatro di Tharros and old quarter of Villanova in Cagliari are l

August – the Redentore takes place in Nuoro, the largest town in Sardinia’s mountainous Barbagia region. The endless procession starts from the city at dawn and proceeds with slow pace and compound, clocked by the strict notes of hymns to the top of the mountain Ortobene. 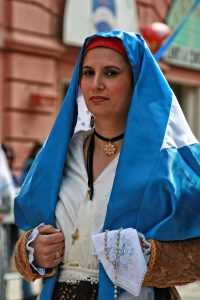 September–early December – The best way to discover the inner Sardinia is to wonder between the 30 towns and villages that open their hearth during Autunno in Barbagia, where you can experience the ancient art of bread-making, taste the autochthonous food and take part in the dancings.

Comfort and highest standars for a People oriented hospital.

We use cookies to ensure that we give you the best experience on our website. If you continue to use this site we will assume that you are happy with it.OkRefuse third party cookiesRead more
Revoke cookie consent